This week a student in Erik Scollon‘s “Craft as Social Justice” course truly inspired me with her project on the ethics and aesthetics of mending. She used the ceramic gold-mending technique kintsugi as her central inspiration for a call to action that challenges her audience–artists and amateurs alike–to deploy their ingenuity to preserve and ho 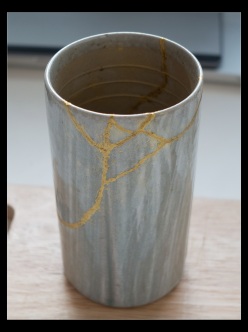 I spent much of the afternoon reflecting on ways I could apply this metaphor to my own life, highlighting and respecting inevitable cracks and fissures–in my own body, relationships, possessions, sociopolitical institutions–rather than attempting to conceal, reject, or ignore them. Kintsugi is about fixing things, yes, but it’s also about identifying ruptures and filling them with beauty.

As a digital storytelling activist I help people reclaim personal experiences, often tender ones, remaking them as attentively crafted, durable narratives. The tellers weave together fragments of memory stored in old photographs, crinkled love notes, scuffed boots. We call it storywork but it is also a form of kintsugi. Piecing together the past. Healing an old wound by telling the tale of the scar.

It is so natural, so tempting, to adopt kintsugi as a metaphor for living better in the new year ahead. But there are so many ruptures all around us. If we were to spend each day finding one precious thing and mending it we would never have time to make something new. And most precious things cannot be mended in a day. And mending doesn’t happen just once, especially not if the thing is returned to use. And preservation is about how we use things, not just about how we mend them.

So I wonder if perhaps what kintsugi is teaching me (today at least) is to focus not on the fissures or on the mending but on the gold. Perhaps the metaphor I need is that of beauty–or better yet, craftsmanship itself–as a way to bring people and things together.

A leaf, a drop, a crystal, a moment of time is related to the whole, and partakes of the perfection of the whole. Each particle is a microcosm, and faithfully renders the likeness of the world.

The first time I read Emerson I was a teenager in college–more of a beach bum, really, enrolled in classes in San Diego but having trouble concentrating day to day. I liked how Emerson’s words felt as they drifted through my mind, his sentences like fractals, repetitive pulsations of insight. I would sit in the sand and look at seashells and think about how each one was a metaphor for lives lived and gone, leaving fragments of themselves strewn about, beautiful and broken.

The second time I read Emerson I was more ready for it. I was twice as old and studying rhetoric for a living. As I ruminated on his essay Language I realized that even though Emerson talks about nature symbolically, he isn’t using metaphor in the customary way. He isn’t just suggesting that we, for example, view a seashell as a symbol of death, nor even as a representative fact of life (even though he says that). Rather, he is suggesting that every seashell is Life, every seashell is the whole world. It’s not merely a “likeness” of the world (even though he says that too); it is uniquely significant all on its own, as a divine creation, and by studying it deeply enough we come to understand its infinite wisdom. The trick, if I can call it that, is to value the single seashell so much–to stay with it long after I think I’ve grasped its metaphorical meaning–to trust that it has much more to notice and ponder because that seashell itself contains everything.

So the American tourist goes to South Africa and sees penguins on the beach. First, let’s face it, she’s just gobsmacked to see penguins on the beach. In Africa. Second, she observes how the behavior of penguins at the beach is pretty much just like the behavior of humans at the beach: they’re all visitors, waddling around, lolling in the sand, cooly observing one another there–each as if the other species belongs somewhere else. Lots of metaphorical observations ensue, during which the tourists (human or penguin) come to represent keen insights about social dynamics or globalization or commercialization or whatever.

But all of that is too pat, isn’t it? It’s fun, but it’s smug. It’s the kind of insight a lot of us make every day, congratulating ourselves on our witty reading of a representative anecdote. It’s a meme.

If we really want to understand the metaphor, to deeply learn from it, we must start by taking seriously the thing itself rather than leaping to conclusions about whatever it may represent.

This is the lesson I learned in South Africa last week. My new Emerson is Karen Worcman, founder of Brazil’s Museum of the Person. She challenged us all to acknowledge that every person’s story matters not for the ways it represents some larger idea or trend or community but because it’s enough. A life lived matters. It is worth remembering. It is worth knowing. An individual life is enough because it is everything. It is the whole world.

As I return to my classroom tonight, to students whose mission is an oral history project with people representing (yep–I said that on the assignment sheet) different perspectives on the gentrification of the historic neighborhood near campus, I feel humbled, schooled really, and grateful to Karen for reminding me to have faith in the power of individual stories to teach us enough. To teach us everything. Here is the video I will use to begin that conversation in class:

I love this post from my new MOOC colleague for many reasons but perhaps most of all because it has us thinking about the MOOC itself as a narrative. My dear grad school mentor, Jim Corder, said, “Life is a narrative we make, or not, that only exists in our own little fictions.” Our EDC MOOC is an open learning space that we haven’t even entered yet. I don’t even remember how to get there–which will be somewhere in Coursera, though under the auspices of the University of Edinburgh. The MOOC student interaction right now is all over the Web (Facebook, Google+, Twitter, etc.) and the course doesn’t actually begin until the end of this month. We have all just built our own learning community sparked by our signing up for the MOOC and informally agreeing to interact ahead of time. I don’t even know how that started (my friend in the MOOC was doing early interaction and that sounded fun so here I am . . . wherever “here” is).