My breakfast this morning was a gloppy, vile mess. I ate it anyway because I’d spent hours last night preparing it: a new 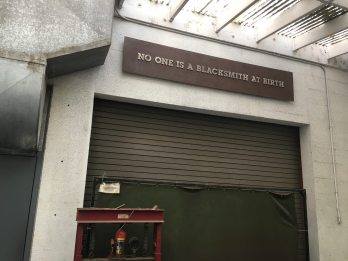 crockpot recipe for kitchari, the nutritious Ayurvedic porridge of beans, grains, spices, and vegetables that has become my mainstay during cold weather or whenever I’m organized enough to prepare a big batch that I can eat all day.

I used Meyer lemons from the tree in my new backyard, and ghee and tricolor quinoa, organic parsnips, coconut, a stick of cinnamon, cloves, other good things. Sounds delicious, doesn’t it? Nope. Vile. And the texture was repulsive–mush and objects that felt like mushrooms only there were no mushrooms. But nourishing, surely. And instructive. The commonsense me thought, “Of course it was awful. You tried too hard.”

It’s true. When I try too hard at things, overthink them, invest too much time and aspire too much, the outcome is usually mediocre at best. Yesterday I’d fantasized throughout the afternoon about preparing the meal, shopping for the ingredients after work, pouring a glass of wine and relaxing into the process–but the process went on too long and became too much and  I couldn’t find a place to plug in the crockpot and had to dig in the attic for an extension cord and just generally I was a big ball of peevishness by the time I set the timer and left the kitchen.

This is a clear pattern in my teaching as well–as a yogi and as a professor–when I turn the corner of basic preparedness to over-planning, when I hope too much or expect too much from a class it becomes too precious and I lose my mojo.

I’m trying hard to remember this lesson as I prepare to teach my first class at a new college. Of course I want to be a great teacher to my students, but as a critically reflective practitioner I want to bring my best self to this experience, the one who is prepared but not obsessively so; the one who improvises easily and joyfully; the one whose students know she cares deeply about their well-being, no matter what else the day or class may bring.

My reflections today are about my core values and expertise, the things that are tried and true to my pedagogy, not about all the things I have done or that I could do–that’s all just too much; it’s how I ended up adding the seaweed to the kitchari.