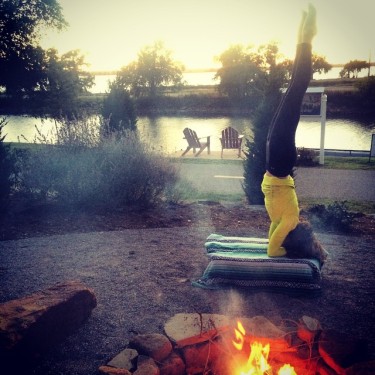 Seconds after this photo was taken, I crashed a few inches from the jagged rocks of the fire pit. It was 2014, the year I decided to blow up my old life and start a new one. By the Chinese zodiac it was the Year of the Horse, a year of action and optimism. I was born under the sign of the Horse and I mistakenly believed that made it an auspicious year for me and my changes. (I later learned that, according to tradition, our zodiac years are the toughest.) 2014 was good, but it was hard. And 2016 was better, and much harder.

2016 was the year of the Fire Monkey, a year of tumult and reinvention. I galloped into the year with an energy that was equal parts desperation and courage. 2014 was the year I committed to move, but I kept pausing in an effort to get it right. A tenured professor with a mortgage and deep roots in a place I knew I couldn’t remain forever, I worried that if I slowed down I’d get stuck again. Living restless was taking its toll. I flew around the world three times in two years–teaching, conferencing, fleeing home, chasing a different version of myself. The version I liked better was the one doing the headstand in 2014: unsteady but determined, willing to take risks to find the right balance in the long run. My decisions were a little more reckless and dangerous than usual, but they didn’t feel wrong. I was more than willing to get hurt if necessary. Indeed, getting hurt seemed inevitable.

My yoga then as now was more than asana, it was an attempt to manage the push-pull of my desires, the need to strengthen my foundation as I reached far beyond it. All serious yogis do this: we put our bodies into physical shapes that are embodied metaphors for the challenges of everyday living. When we stand in Tadasana, mountain pose, we are called to attention, Samasthiti–physically, this means finding equal balance, but this equipoise is also a state of mind; we are maintaining awareness as well as acceptance of how and where we are. Likewise, Vrksasana, tree pose, is the practice of remaining grounded as you take an asymmetrical form: allowing yourself to sway teaches you how to be steady; you also learn that swaying doesn’t necessarily mean unsteadiness.

By the lunar calendar, Fire Monkey year concludes soon, on January 27. After catapulting into a new city, a new job, and a new relationship, I have been attempting to decelerate, to transition as gracefully as possible, with gratitude and care. But in asana I have been spending more time in asymmetrical balancing shapes, especially Vrksasana variations, testing my edge, reminding myself that it isn’t over, that in some way I must always remain able to pivot, to choose when and where to be steadfast, and for whom. 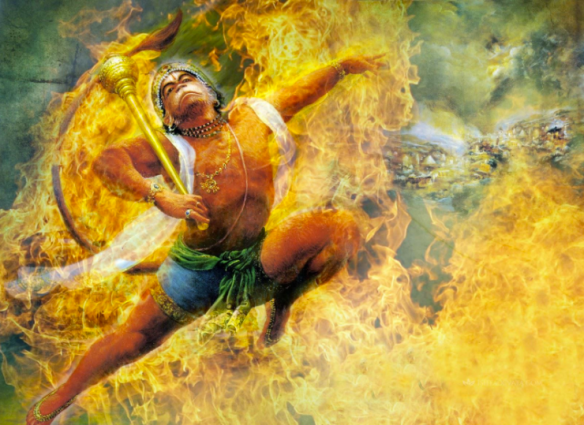 The mythology behind Vrksasana involves another fire monkey, the deity Hanuman. In the epic Ramayana, goddess Sita–virtuous Queen to Rama–meditates against an ashoka tree for many months, resisting the provocations of her narcissistic captor, Ravana. In her stillness Sita emulates the tree, acquiring patience and fortitude. Ultimately, Sita is rescued by Rama’s loyal servant Hanuman, whose tail is set ablaze by Ravana. Hanuman’s flight from Ravana is triumphant and funny–he grows his tail impossibly long then soars through Ravana’s kingdom igniting fires until at last he quenches his tail in the ocean.

Hanuman’s pose, Hanumanasana, resembles the monkey god flying through the air: legs in a forward split, arms stretched to the sky. But this pose, like vrksasana, is as much about stability as it is about movement.

Sita and Hanuman are both divine figures of steadfastness and loyalty: Sita through pious forbearance, Hanuman through audacious adventure.

The god on my altar is Hanuman.