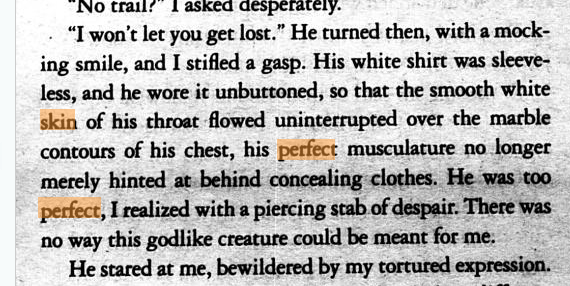 I remember somewhere around 50 pages into the first Twilight book thinking I couldn’t possibly bear any more of the writing. I winced at every new appearance of “his perfect marble skin” and though I soldiered through the rest of the chapters I realized the pop culture indulgence had become more of a crappy habit–like drinking bad coffee because it’s there in the pot on the way to the copy machine.

I had that same feeling this morning reading Reality Steve‘s blog. I don’t know why I read Reality Steve. Yes I do: I’m a fan of Survivor and of the gameplay forums on Television Without Pity and sometimes people in those forums mention Reality Steve so I click over to read what he’s saying. Also, he covers The Bachelor–an awful franchise but fascinating for people like me who study the social construction of gender roles. I cannot adequately describe how satisfying it is to juxtapose, say, The Bachelorette‘s Emily Maynard and RuPaul’s Drag Race contestant Willam or Chad Michaels; The Rose Ceremony vs. Lip Sync for Your Life. Endlessly, endlessy edutaining.

Unlike Twilight, which has no socially redeeming value, the Reality Steve blog in its way has seemed worth supporting. He’s a high profile spoiler and the legal cases against him are forcing relevant questions to the surface regarding intellectual property and media coverage and the preservation of “reality” narratives on these programs. I think Reality Steve’s spoilerage is doing important cultural work, actually. He refuses to treat “reality” as reality. There’s something to that.

But, honestly, his writing is so bad–well not “bad” but so very meh. He’s been blogging thousands of words for years and his writing has never improved. He seems to make no effort to be witty or entertaining to anyone but himself. He just rants through otherwise dry, wordy recaps. Reading his latest installment, I remembered an adage from a dance colleague: “practice makes permanent.” Doing lots of crappy writing with no attempt at craft yields lots more crappy writing and might even make you a crappy writer <– which is something I never like to call anyone, so how about “meh” writer. Yes, that’s a fair critique because a lot of meh writing is done by decent writers who are more committed to cranking out text than crafting text.

Yet that’s what I’m doing right now, isn’t it? I’m kvetching and ruminating and don’t intend to take the time to revise this blog posting. I probably blog this way all the time. So the lesson I’m learning from Reality Steve is the lesson I didn’t take the time to learn from Twilight: it’s time to pay more attention to my own blog writing. I don’t want to get hung up on craft to the point I’m too self-critical to post. But I do want to start paying more attention to the blog authors whose writing strikes me as especially well crafted. And I want to spend this semester, alongside my students,  noting and emulating some of the craftsmanlike moves made in blog writing.