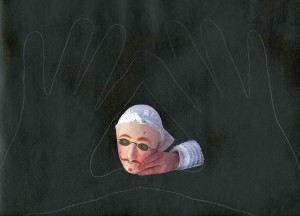 Later today I’ll meet with my colleagues again to explore the uses of collage–specifically as a heuristic or as a way of doing critical thinking during (as well as through) visual composition–for our upcoming workshop with educators.
I’m still resisting the commonplace: I don’t want this to be simply (yes, yes, I understand it’s never so simple) a metaphorical exercise but instead an activity that draws upon a kind of aesthetic instinct as well as other dimensions of the composing process.
I don’t want to over-talk the exercise and yet somehow I want the participants to experience (within a very short time frame–eek!) a way of exploring ideas that transcends verbal and visual and that culminates in a composition that speaks to them in complex ways over time.
The image above is one of my early experiments. My original plan for the workshop was to have everyone do something very much like this. It’s modeled after Joanne Leonard’s “Hand In” series, which was an exercise in constraints: she challenged herself to complete a series of collages that used a single, simple, repeated image: an outline of one hand in white pencil on black silhouette paper.
I love the basic design: it’s simple but potentially sophisticated (at least, in Leonard’s execution of it!) and for a workshop with mostly novices it seems like a lovely to create something complete and aesthetically pleasing guided by a model in a process that although somewhat imitative yields a work as unique as the hand of the artist outlined on the page as well as her choice of imagery.
But I worried that participants expecting to do collage (a genre associated mostly with masses of images rather than spare ones) might find this approach too limiting, and my colleagues agreed. So today we’ll be exploring with alternative methods, visuals, options. I’m hoping to at least retain the hand symbol as a common constraint.
Beyond all that, though, remains the purpose: how do we communicate that this activity is intended to help us tap into a way of knowing that is aesthetic, cognitive, intellectual, emotional, instinctual?
I’ve been reading more of Maxine Greene’s work on aesthetic education (as part of a course through the Lincoln Center Institute) in which Greene seems also to be struggling to find clear ways to explain, in layman’s terms, what happens when we use art to learn. Her writing style is so fluid and her voice so authoritative that you might not perceive her composition as a “struggle” (and indeed she might not describe herself as “struggling” either) but as her reader, as someone who has thought about this sort of thing for years and is combing through Greene’s writing to find a clearer expression of the academic and rhetorical aims of aesthetic education, I must say that I’m finding lots of lucid explanation that ripples through the subject without yet clarifying it. At least not in the ways I need. She is concerned mainly about art education period: What it means (or really ought to mean), why we should do it, how it works.  My concern is this: how does the process of making and engaging art help us do a better and more interesting job of teaching rhetorical ingenuity: identifying potential sources of insight, locating/mining/interacting with those resources, tapping into one’s own prior knowledge and experience as ways of knowing and not-knowing, determining what kinds of knowing are needed by and for one’s audience/oneself/those beyond who might benefit from your work, plus all that other rhetorical canon stuff (invention, arrangement, style, delivery, memory, taste).
Of course any educated rhetorician can rationalize the use of art to teach composition. What I’m looking for is more information: research data from other disciplines, explanations I haven’t already thought of or read about elsewhere, and also I’m looking for more discussion of the creative process as something novices can authentically do with satisfying outcomes that aren’t purely responses to “real” art done by experts.
But I digress. Sort of. Not really. As I search in Greene for a way to articulate the collage workshop I come across this from her “Notes on Aesthetic Education””

Surely we can learn to articulate more clearly what it is about making
and attending that so often opens up new perspectives, that allows people to
perceive new experiential possibilities, that offers them new symbolic
languages through which to express themselves. Surely, when we are
aesthetically educated, we can break through the either/or [of cognitive vs affective learning]. (19)

So far that’s as close as I’ve come (see what I mean?) to what we’re supposed to be doing with the collage. And perhaps “critical thinking” is too specifically Schonian a term for that process.  I am more comfortable calling it “deliberation.”  I’m hoping that the collage-composition experience will be a deliberative experience in which the participants:

All of that is true of my collage above:
Although my underlying purpose the day I made it was to compose a complex image that in some spoke to myself-concept as a teacher, the images I gathered were chosen rather serendipitously. I ended up cutting the above image from a full-page photograph of a group of masqueraded revellers in Spain from a National Geographic magazine.
I drew my hand-configuration first and selected the image later as one that might lend itself to the composition As I slowly snipped the image and as I shifted it around on the page the activity became a meditation on not only what should go where but why and why not. I made decisions about the positioning of my hand or hands on the page that would ultimately feature the image and whether to keep the reveller’s hand visible; I asked myself about the significance of the masks and about the fact that the mask remaining in my image is really on the top of a reveller’s head rather than on his face. Is that somehow relevant to my self-concept as a teacher? And so on.

Ultimately, I completed an image that I could explain in a variety of ways but, to be honest, I am still listening to what it has to say.
Image source: HB Hessler